A 54-year-old male patient has a previous (a month earlier) normal ECG, and the physician did not diagnose any problem.

CHART test is done currently, which shows a different picture.

The blood pressure is high: 160/100. Otherwise no other cardiac-related risks.

The DDIM is rather confirmed by the opening snap detected on the PCG signal and prolonged RVFT on MCG. The DDIM may also be connected to high diastolic pressure also.

The estimated LVEF shows normal systolic function. The patient probably has no symptoms, but based on the HFpEF score, it fulfills the borderline criteria for a potential HFpEF patient.

Despite the ECG rule-based evidence, the inferior myocardial infarction is uncertain, because of the presence of LAFB. The ECG literature already discusses this problem[1].

The possible LA enlargement is detected based on P terminal force and longer PR interval (200), but LA enlargement was not confirmed by HART-findings. The literature reports high inconsistency between ECG P-mitral and ECHO-based LAE[2]. 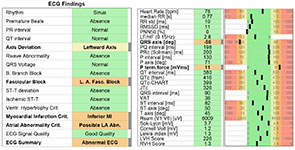 PCG signal shows wider but lower amplitude first sound and strong second heart sound. In addition, the length of the normal inactive systole (LVST) is shorter compared to the first sound periods, which is not typical. 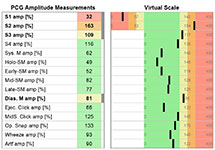 The pattern recognition of rapid ventricular filling time (RVFT) is less certain, but this may indicate any diastolic dysfunction.

The patient has no symptoms, but the abnormalities detected by ECG and wall motion by HART-findings have a referral type of Watch 6 months for further analysis, as well as consider BNP test.

Cardio-HART or CHART, is an AI cardiac diagnostic system for the non-invasive detection of the early onset of 93% of all common heart diseases, including heart failure and heart valve disease. It is a direct replacement for ECG, augmenting it with Echo functionality, that is indicated for use in clinical care settings, including primary care.